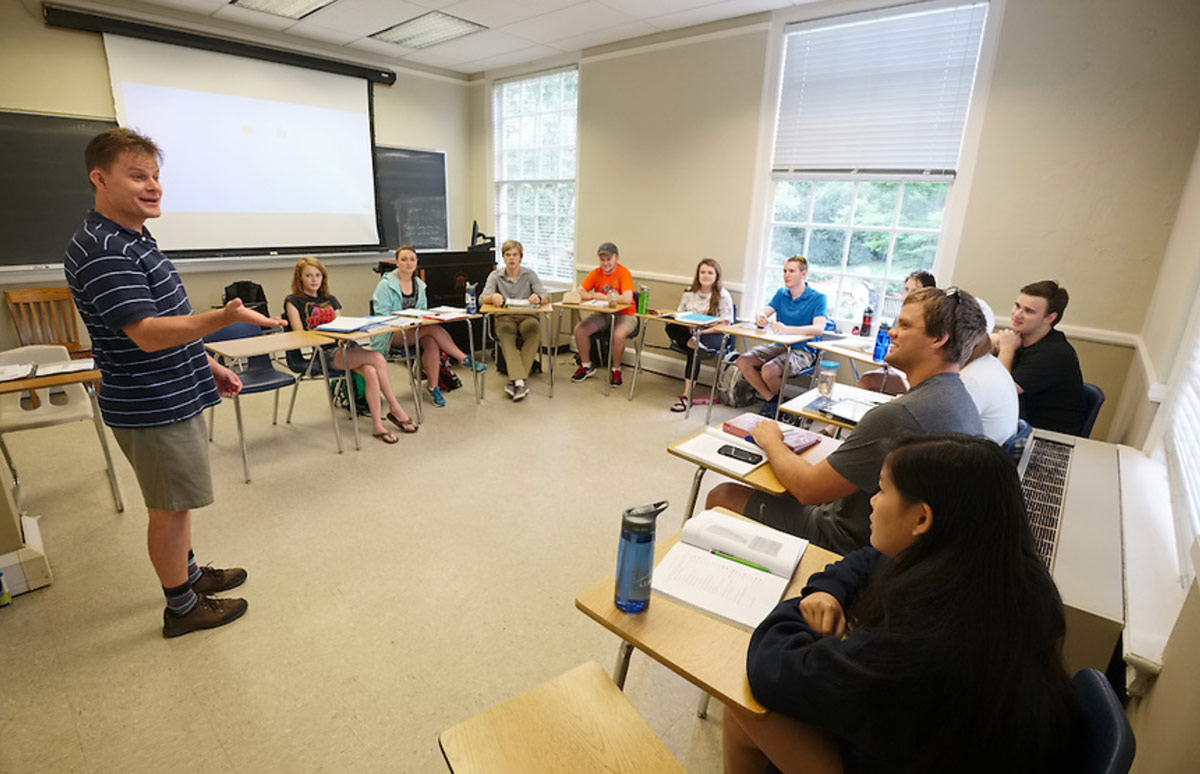 The University of Mississippi has been awarded an Arabic Flagship Program, a program designed to graduate students with a commanding fluency level in a language critical to U.S. competitiveness and security. Photo by Robert Jordan/Ole Miss Digital Imaging Services

OXFORD, Miss. – The University of Mississippi is one of two new recipients of an Arabic Flagship Program, an esteemed language program for undergraduate students available only at select higher education institutions.

Launched in 2002, The Language Flagship programs are sponsored by the National Security Education Program, a federal initiative with the purpose of creating a wider and better-qualified pool of U.S. citizens with foreign language and international skills.

The languages offered through 31 Flagship programs at 21 institutions of higher education are Arabic, Chinese, Korean, Persian, Portuguese, Russian and Turkish.

“UM is now a de facto hub of critical language learning in America,” said Allen Clark, associate professor of Arabic and co-director of the university’s Arabic Flagship Program. “We believe we have the No. 1 Chinese and Arabic Flagship programs in the U.S., unrivaled.

“Because of this, we will be able to recruit a stronger pool of language learners who have the ambition and determination to make positive changes in all sectors – public and private – to include American foreign policy through a well-grounded, balanced view of the developing situation in the Arab region.”

The first year of the two-year grant is for $274,999.41. An estimated $325,000 is expected for the second year. The funds will allow UM to scale up its existing Arabic Language Program by hiring new faculty, adding courses and increasing funding for study-abroad opportunities.

“When we started the Arabic program back in 2008, we set up the Arabic program always with the idea that this would become a Flagship,” said Daniel O’Sullivan, a French professor and chair of the Department of Modern Languages, which houses the two Flagship programs.

“We were modeling the Arabic program on the Chinese Flagship that we had, and we believe that we’ve had a Flagship-quality program for years now.”

“The designation of our second flagship language program is a testament to the University of Mississippi’s sustained leadership in the field of international education,” Chancellor Jeffrey Vitter said. “It aligns perfectly with our goals as a flagship university and furthers our reputation as a hub for student international experience and language immersion.

“It will also contribute to our efforts of creating a strong pool of proficient professionals for our increasingly global world.”

The Language Flagship programs are designed to graduate students with a commanding fluency level in a language critical to U.S. success and security.

“These are programs across the United States that have agreed to engineer their curricula in a way to take students in their programs to a very high proficiency level,” said Donald Dyer, associate dean for faculty and academic affairs in the College of Liberal Arts and distinguished professor of Russian and linguistics. Dyer also is co-director of UM’s Arabic and Chinese Language Flagship Programs.

“The students in our programs are from all over the United States,” he said. “They have extraordinary academic profiles. … They are really top-notch students. They are aggressive risk-takers who are willing to go for it. … They are a real credit, a real asset to the university.”

The Arabic Flagship Program at UM will be a scaled-up version of the Arabic language program, directed by Allen S. Clark, associate professor of Arabic. Photo by Robert Jordan/Ole Miss Digital Imaging Services

“Adding the Arabic Language Flagship Program dramatically expands the opportunities for our students and validates the quality of faculty who teach Arabic.”

According to the United Nations Educational, Scientific and Cultural Organization, Arabic has more than 290 million native speakers worldwide and millions of others with some fluency, making it one of the world’s five most-spoken languages.

The Language Flagship states that students who possess superior proficiency language skills in one of the specified languages are afforded intercultural insights that aid them in their careers, whether it is in government, business, nonprofits or other fields.

Cynthia Bauer, an Arabic and international studies major from Albuquerque, New Mexico, said she took an Arabic language class in middle school and high school and enjoyed it so much that she decided to devote more time to it at Ole Miss.

“Majoring in Arabic at the University of Mississippi was a great decision for me because the teachers and my peers really push me to excel and to use the language in ways that I couldn’t imagine before,” said Bauer, who will be a senior this academic year. “I plan on using my Arabic skills for both reading Arabic literature and doing ethnographic research in the future.

“Studying in the Arabic Language Program at the University of Mississippi has brought me to a level in my Arabic speaking skills where I’m able to have a conversation in Arabic with anyone on the street, and will be hugely important for my career in the coming years.”